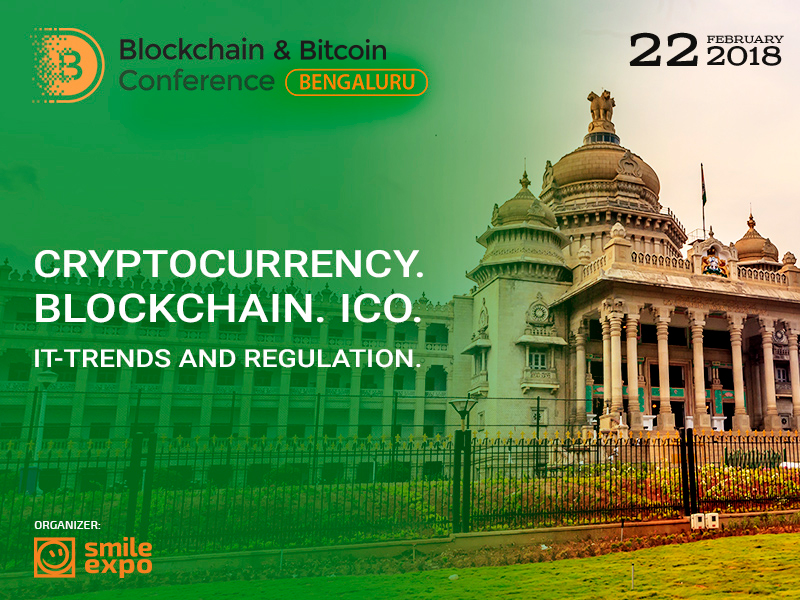 On February 22, Blockchain & Bitcoin Conference Bengaluru will discuss the development trends of blockchain and cryptocurrency in India. Event guests will learn why India is one of the most blockchain-friendly states, and how the country’s authorities are going to regulate the fintech sector in the near future.

Why is blockchain significant to India?

That’s why such companies as Microsoft are led by the brightest Indian brains. The company’s CEO Satya Nadella is Indian. And by the way, the Microsoft’s branch office is located in Bengaluru, the city, where Blockchain & Bitcoin Conference will be held. There are also representative offices of other large international IT corporations: IBM and Oracle.

That is why blockchain conference couldn’t be held without the representative of the IT industry. Innovation Head & Technical Architect at DCB Bank Prasanna Lohar will give the developers a detailed explanation about their best blockchain opportunities.

Blockchain and authorities in India

The authorities of India are aware of the importance of blockchain, so the Central Bank of the country supports blockchain initiatives. Large Indian banks, such as ICICI, Axis, Yes Bank and Kotak Mahindra are already using blockchain in international remittances.

Representatives of the financial sector will be able to find out what will happen with banks after the implementation of blockchain and cryptocurrencies during the report of the speaker of Blockchain & Bitcoin Conference Bengaluru, Raj Chowdhury. Raj has an insider's knowledge of the topic, since he previously held the position of Technology Innovation Lead in ICICI Bank.

According to the report on the global financial services industry provided by PwC, Asia is a region where fintech actively promotes the growth of financial products and services. And it is Asia that expects the largest percentage of ROI from the introduction of fintech into financial services.

Representatives of financial services will find out how financial technologies will affect their activities from the report of Founder & CEO of Cashaa blockchain company, Kumar Gaurav.

The Indian crypto community doesn’t wait for state regulation to appear. Instead, it tries to develop rules and standards for interaction on the market. Therefore, the country has two non-profit organizations engaged in the promotion and inculcation of the blockchain technology in India:

Their aim is to connect all blockchain-based startups and their CXOs, government bodies and blockchain enthusiasts to inspire, participate and collaborate in each other’s success in this growing industry.

Entrepreneurs who want to introduce blockchain into business will learn about the best practices from the speaker of the blockchain conference, who is currently leading blockchain-based consultancy BlockSmiths — Harmeet Singh Monga.

Despite the fact that the cryptocurrencies are not included into the legal field of India, the authorities of the country do not interfere with their circulation. However, according to the Reserve Bank of India, the regulator has begun to develop laws on the use of cryptocurrency. When the laws come into force, the crypto community will receive official protection of the authorities in disputed situations.

Similar to the cryptocurrencies, ICO is not regulated by the Indian legislation. At the same time, this activity isn’t banned in the country. What is waiting for those investing in tokens? What legal, regulatory and tax prospects will have the token sales sector? These questions will be answered by the Panel Discussion participants, including the world-renowned crypto experts. The discussion will take place in the format of blockchain meetup within Blockchain & Bitcoin Conference Bengaluru.

And those who are interested in other jurisdictions to launch ICO, in particular those of the European Union and Switzerland, will get acquainted with the report of the CEO of ICO advisory entity SICOS Arnab Naskar. He will tell the audience what laws are applied to ICO in European countries.

Do you want to learn more about the crypto industry development and digital assets regulation in India?